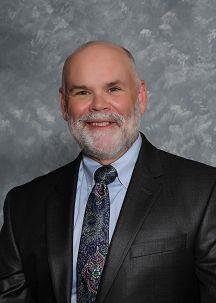 Dr. Johnson is a 33 year veteran of the public schools in Georgia (25 years with GCPS). August 5th, 2019 was Dr. Johnson's 50th 1st day of school (a half century of learning).  He has served as a teacher of mathematics and French, Professional School Counselor, administrator with Gwinnett Online Campus, and Assistant Principal at Phoenix High School, before coming to join the faculty and administrative team here at Peachtree Ridge in 2009.  Dr. Johnson retired from GCPS in 2015 and has been grateful to return to the Ridge as a half time employee since the fall of 2015.  After 11 years both full and part-time, this will be Dr. Johnson's last year at the Ridge!

In addition to his Georgia certification as a school administrator, Dr. Johnson is a certified Professional School Counselor in Georgia, Tennessee, and North Carolina and holds teaching certificates in each of those states in Mathematics and a teaching certificate in French in Georgia.  Dr. Johnson was honored as Teacher of the Year (1986) at Butler High School in Augusta, Georgia and was a finalist for Teacher of the Year at Hephzibah High School, Hephzibah, Georgia (1994) and South Gwinnett High School, Snellville, Georiga (1997).  In 2012, Dr. Johnson was humbled to receive the Mary Jo Hannaford Counselor Advocate of the Year Award for Gwinnett County Public Schools and went on to win the Region 2 and State of Georgia Counselor Advocate of the Year awards in 2013.

Dr. Johnson is the part-time Assistant Principal of Assessment responsible for the HS Gateway, Georgia Milestones (EOC), ACCESS (testing for English Language Learners), and the S.A.T.  He has worked directly with assessment since 1998 at his two previous schools,  Phoenix High School and Gwinnett Online Campus.    Dr. Johnson shares responsibility of the assessment program at Peachtree Ridge with his friend and colleague, Ms. Rosie Placek.    In addition, Dr. Johnson is also the Coordinator for Dual Enrollment students here at the Ridge.  To find out more information about Dual Enrollment, click on the Dual Enrollment link after landing on the Counseling Information webpage.  DUAL ENROLLMENT

Now that retirement has allowed for more time away from assessments and the Ridge, Dr. Johnson can usually be found on the tennis courts, the bowling alley, the gym, hiking at Stone Mountain, or better yet, the North Georgia mountains where he hopes to relocate in the next few years.   Dr. Johnson has a beautiful property in Mineral Bluff, Georgia that he plans to build on in the the very near future.  Dr. Johnson completed (like a tortoise) his first HALF MARATHON at Disneyland resorts in Paris in 2017 and shaved off 42 minutes from his previous time in his second attempt in 2018 in Disney World, Orlando.  A future goal is to do the two course "Goofy" challenge at Disney,  a 10K on Saturday followed by the Half Marathon on Sunday--possibly even returning to Paris for this opportunity.

Dr. Johnson is excited to serve the Peachtree Ridge community through this academic school year!