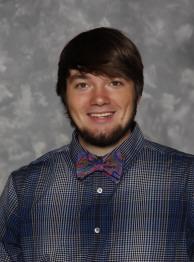 Mr. McClanahan began living in a town that sits above the edge of a rock that in a different place sticks out of the ground the most for the kind of rock that it is.

When he was little, Mr. McClanahan liked things that people had built. He liked making the things not-built so he could see how they worked. He really liked looking at how the pieces of thing worked together to make the thing do its job.

When he was older, Mr. McClanahan learned a game at school where you play with numbers, and things that are like numbers but you don’t actually know what they are yet (Figuring that out is the point of the game).

Because Mr. McClanahan liked learning how things worked, and because he enjoyed the game where you play with numbers, he went to college so he could learn more about the way things worked by playing the numbers game in fun and different ways.

The college was in a town that used to be where important people made plans for a big group who had decided that they did not want to be a part of a really big group of people anymore. But that all happened a long time before Mr. McClanahan was there.

While at college, Mr. McClanahan learned many things about the place full of stuff that we all live in, and how it works. What he learned the most about was how the place full of stuff works when you look at it’s really really tiny pieces. He also learned about the tiny pieces of stuff themselves. What he liked the most was learning how to make them go really fast and hit into each other. He like this because the tiny pieces would break into even tinier pieces and then come back together in beautiful new ways.

The about me above was written as a challenge, and only contains the top 1,000 most commonly used words in the english language. The goal being to show that interesting and/or creative ideas do not require fancy or impressive language. Want to give it a try? Here is a website to help you.

"If you can't explain a concept simply, then you simply don't understand it well enough." -Richard Feynnman.