The Georgia Association of Secondary School Principals (GASSP) visited Northbrook Middle School on February 15, 2021, to surprise Principal Dr. Keith Thompson with the news that he is the organization’s 2021 Georgia Middle School Principal of the Year. The naming of the “Principal of the Year” culminates a process that began with a statewide search for principals who excel in educational leadership, resolving complex problems, developing self and others, and community service. 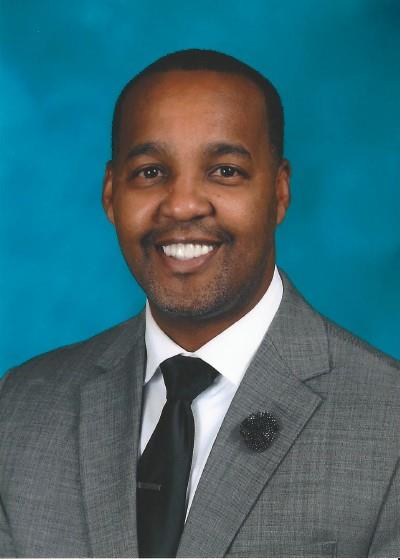 In addressing the socially distanced group that gathered in-person, as well as his staff members who were participating via Zoom, Dr. Thompson turned to the screen and announced to his staff members that this award was theirs, not his. He laughed saying that he does not like surprises and said, “You guys got me good on this one.” He went on to thank his staff, his family, and other leaders for believing in him. He said, “What I do is for the kids. My mantra is that we want to be high-achieving and nurturing. You can’t get that high-achieving part without the nurturing part.”

Dr. Brooks Baggett, an assistant principal at Northbrook, also shared Dr. Thompson’s vision for the school that it would be grounded in excellence as it produces high-achieving students in a nurturing environment. He said, “From the very first day, Dr. Thompson has built a culture of excellence in which teachers and staff are obsessive about instructional time, relentless about student learning, respectful of each other, and passionate about each child. Northbrook is a great place to work and a great place to learn and Dr. Thompson is a true servant leader. This amazing recognition from the GASSP is not an award he sought, he was encouraged by his enthusiastic team to apply. At Northbrook Middle School we know what an extraordinary leader Keith Thompson is, and we wanted to make sure the district and state knew, too.”

Peachtree Ridge High School Principal Jadd Jarusinski and Maryanne Grimes, a former GCPS principal who originally hired Dr. Thompson, both spoke at the event, touching on Thompson’s leadership. Mr. Jarusinski said, “One of his strengths is that Dr. Thompson knows his people and he cares for them and that is evident by the great success found here at Northbrook.” Mrs. Grimes added, “He sees and hears people. That is his super power… Dr. Thompson is the kind of leader who makes everyone around him better.”