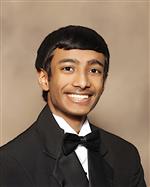 The Coca-Cola Scholars Scholarship is unique in that recipients have between four to 10 years to use the full award and may opt to defer all or part of the award within that 10-year timeframe. The funds can be used for tuition at an accredited college or university or for other educational expenses as specified by the Foundation, such as on-campus housing, a computer, or textbooks. The Coca-Cola Scholars Foundation hosts frequent receptions throughout the country and also invites Scholars from all classes to return to Atlanta for a Leadership Summit every five years to engage in interactive sessions developed by alumni.

In addition to earning a Coca-Cola Scholarship, Sayid also has been awarded the President’s Volunteer Service award, which is granted to people who put 250 hours into helping others, and he’s earned a $1,000 scholarship from the National Beta Club. He is the only student in Gwinnett County to be named as a semifinalist for one of the National Beta Club’s top five awards. Sayid will attend Rice University in the fall where he will major in political science and business. He intends to become a lawyer and run for congress.