Kadeem Agard, a recent graduate of South Gwinnett High School, has been named the 2020-21 Gatorade Georgia Boys Soccer Player of the Year. Agard is 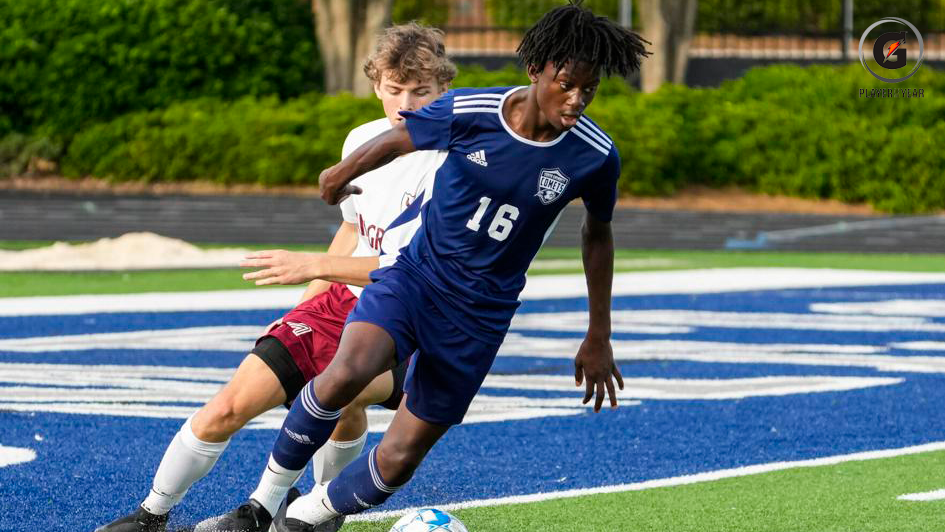 the first Gatorade Georgia Boys Soccer Player of the Year to be selected from South Gwinnett High. The award—which recognizes outstanding athletic excellence as well as high standards of academic achievement and exemplary character demonstrated on and off the field—distinguishes Agard as Georgia’s best high school boys soccer player.

The 2021 graduate played forward, scored 43 goals and passed for 12 assists this past season, leading the Comets (17-4-2) to the Class AAAAAAA state semifinals. The Class AAAAAAA Player of the Year, Agard recorded seven goals and four assists in four postseason games. A two-time Gwinnett County Super 6 selection, he recorded 14 multi-goal games including six hat tricks in his prep career. In addition, Agard is a volunteer youth soccer coach. “Kadeem had an incredible year,” said Christian Vasquez, head coach of South Gwinnett High’s team. “He had stats that you won’t see every day. Kadeem is hardworking and well-deserving of this award.” Agard, who maintained a weighted 3.61 GPA in the classroom, signed a National Letter of Intent to play soccer on scholarship at Mercer University in the fall.

Among Georgia’s former state award winners are Vedad Kovac (2019-20, Lassiter High School), Omar Hernandez (2018-19 & 2017-18, Dalton High School), and Jake Donaldson (2016-17, McIntosh High School). Through Gatorade’s cause marketing platform “Play it Forward,” Agard has the opportunity to award a $1,000 grant to a local or national youth sports organization of their choosing. He also is eligible to submit a 30-second video explaining why the organization he chose is deserving of one of twelve $10,000 spotlight grants, which will be announced throughout the year. To date, Gatorade Player of the Year winners’ grants have totaled more than $2.7 million across 1,117 organizations.

Since the program’s inception in 1985, Gatorade Player of the Year award recipients have won hundreds of professional and college championships, and many have also turned into pillars in their communities, becoming coaches, business owners and educators.