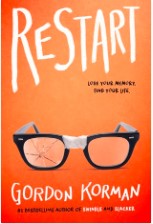 He knows he's Chase. But who is Chase? When he gets back to school, he sees that different kids have very different reactions to his return.

Some kids treat him like a hero. Some kids are clearly afraid of him.

One girl, in particular, is so angry with him that she pours her frozen yogurt on his head the first chance she gets.